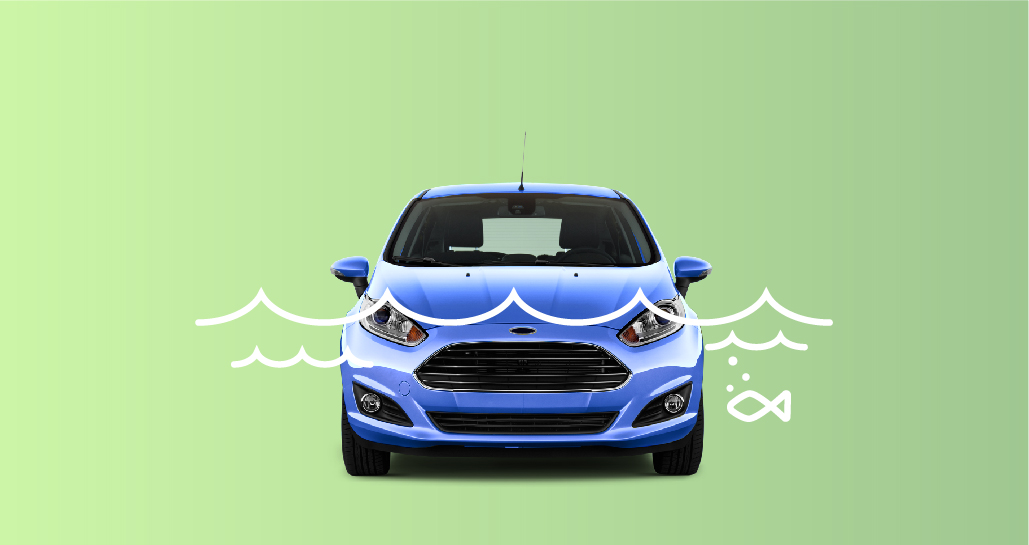 Flood damaged cars? You might never have given a single thought to flooded cars. But if you’re currently on the market for a new car, this is one soaking wet subject you should probably be aware of.

Flood damaged cars can present a whole host of problems to unsuspecting buyers, which is why it’s important to learn the tell tale signs that a car has been underwater.

This is especially important when buying a car from a private party, as opposed to a licensed dealer. Dealers are required by law to disclose problems in the history of a used car. The rules for private party sales, however, vary from state to state.

While there is no guarantee that you’ll be able to spot a flooded car when you see it, it’s still wise to learn what to look for to help you avoid getting ankle deep in the troubled waters of a flood damaged car.

Below is The Appraisal Lane’s 5-step system for identifying the basic signs of flood damaged cars using the acronym S.M.A.R.T.

Pay attention to musty, moldy odors in the interior of the car which could be an indicator of prolonged water exposure. It’s hard to conceal moldy odors, even with the use of cleaners and air fresheners. Be on the lookout for an overuse of air fresheners, as this could indicate the seller it trying to cover up the smell of mildew.

Damp or moist carpets, seats, sun visors, and headliners could also be signs that a car has been underwater in the recent past. Gently pull back the rubber weather sealing where the doors meet the headliner. Also check for water, water line marks, and excessive moisture in the headlight and taillight assemblies.

A - Accumulation of Debris

When flood waters recede, inconspicuous debris can be left behind in specific areas of a vehicle. Take a few minutes to check these spots for mud, sand, grass, twigs, or visible water lines:

Rust and corrosion can be cause for concern, especially when they’re found under the dash, on springs, on brake rotors and drums, or on the car’s frame.

Be sure to pop the hood and check for corrosion on components and connection points within the engine compartment. Pay attention to any exposed electrical wiring and connectors. Excessive corrosion in wiring can be a sign that the car’s been flooded.

Sometimes the rust is hiding right below you. Take a look at the seat frames where the seat connects to the floor, and the seat belt bolts on the floor as well.

Next, the trunk can often be a repository for standing flood water and debris. Long after the flood water recedes, the tell tale signs of flooding can remain in the trunk.

Finally, inexperienced sellers often overlook a trunk check. As a buyer, be sure to pop the trunk and check for odors, moisture, debris, and water lines. If the seller is hiding anything, the trunk may be your tip off.

Three Additional Tips to Help You Avoid a Flooded Car

Sometimes you can check every nook and cranny and still not find any signs that a flood damaged car has been underwater. In cases like these, it helps to know other sources of information that might shed some light on the car’s history.

Here are three additional tips that might help you avoid buying a flooded car.

If there’s any official record of a vehicle sustaining flood damage, it should be included in the vehicle history report. You can obtain a copy of a vehicle’s VHR from several different outlets; two popular services are AutoCheck and Carfax.

Beware of a vehicle that is suddenly for sale in your market but has previously been registered in a known hurricane area, especially in the months immediately following a hurricane.

Vehicle history report services like those mentioned above will often tell you where a vehicle has been registered. If you are concerned that a car might have been involved in a hurricane or flood, be very diligent and inspect the vehicle using the S.M.A.R.T. method described above.

3 - Pay Attention to Other Types of Damage

There are other types of damage a car can sustain as a result of a hurricane, including hail damage and sandblasting. Small sized hail on a light colored exterior could possibly go unnoticed, as could sandblasting from high winds. Be sure to closely inspect a car’s exterior from several angles in good lighting.

To be certain you’re not accidentally buying a flooded car, you could solicit an inspection from a qualified mechanic and/or body repair shop. Their expertise could prove critical in helping you determine whether or not a car has sustained any water damage.

Take the time to make a careful decision. Flood damage can cause extensive issues in a car’s electrical system, in addition to corroding the car’s frame and engine components. These issues are sometimes not immediately apparent, instead popping up unexpectedly over the coming months and years.

A Guide to Retail, Trade-In, and Private Party Values

Can a Car's Value Increase Over Time?